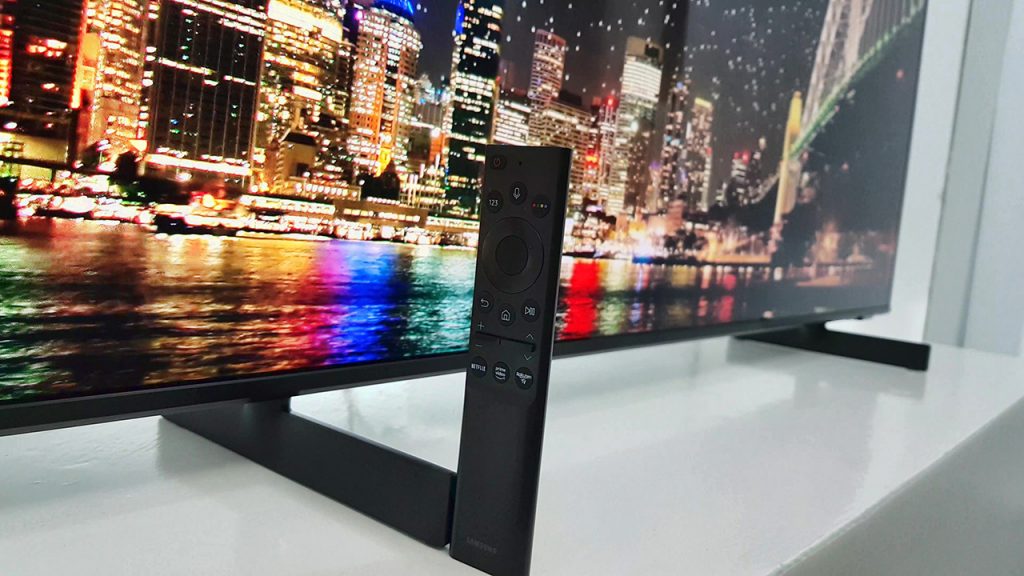 The Samsung au8000 is the latest edge led tv with support for hdr.  It has almost everything what’s important in the midrange tv class. Now what is interesting is that Samsung’s claiming that this tv has 3 side bezel less design and it is gonna be a lot faster, kinda turbo faster, so we need to put this to the test. otherwise Samsung 8 series has a lot of variants from 8000 to 8075 and higher, but they all have the similar screen quality which offers 4k resolution hdr10 and tizen apps.  I performed a hands-on evaluation of the 50-inch 50AU8072, but this review also applies to the other screen sizes from the 8000 series.

Now what made me curious is that On the outside au80 is different from every side to last year’s tiu85 series and there are some noticeable changes inside too, especially with speakers and faster 4k picture processor. It’s well upgraded, but can it match the competition in the line.

Inside the box are two mystifying t shaped legs and a usual Samsung TV first aid package with power cord, the remote control with the batteries and a quick set-up guide for those who can’t read.

The au80 has a cool new design with even more stylish bezels, and they are  getting thinner year to year. That’s thanks mostly to a new 3 side bezel less design and thin back,  so it should look modern and sleek on any walls or shelves. Dimension wise. the au8  is available in many sizes: from 43 to 85 inches. Those using the stands will appreciate its minimalistic plug and stay design. It has these new brackets instead of using screws, so you just slide in and you are ready. TV looks and feels well made despite the stand not using any screws.

At its thickest, the au80 sits at around 2,5 inches, which is quite slim in comparison with some direct led tvs, so it’s gonna fit quite good on your wall . Round the back, there is 2 usb, 3 HDMI 2.0,  ethernet and optical port. I like the built in cable management on the back, it would be cool if one of those lines continue into those mini legs. but if you plan to mount a TV on the wall you will need a M8x45mm Screws.  Lucky you will only need to hide the power cord, because this tv has Wi fi and Bluetooth-enabled if you’d rather go wireless.

In recent years The remote did not change a lot. It is still comfy and easy to navigate. The build quality feels like premium plastic with some metallic accents. The top half has volume, channel, menu control buttons and a lot of shortcuts to video stream apps, there is also a dedicated voice button, if you want to use voice search. so the remote works via bluetooth.

The bottom part is unused and there is no  channel numbers for dvb tuner, i wonder why samsung thinks number buttons are not necessary anymore, its true that some users don’t care about them anymore, but while others will need to press multiple time to access channel, i think we could have the best from both worlds if user could change the role of number buttons so you could assign them to your favorite apps or use them for channels. so the 123 button could toggle between app and channel mode. but until then you will need to use voice control and an on screen keyboard. Lucky you can still buy a classic Samsung remote.

One of the best things about Setup is the fact that it’s much faster than average initial tv setups, thanks to its background source scan. once its setup compete, you just press the home button on the remote and here’s your home screen you can see Samsungs updated Tizen 6 system and it features some minor changes, such as different colors and content highlights as we hover over home icons.

It does allow for plenty of smart features, including art mode, wireless screen and quick control through samsung smart things app.  It has a fast search feature and most of the best smart tv apps. you’ll find everything from youtube, web browser to netflix. sadly The tizen collection of apps is still limited in comparison with google tv, especially if you want games.

If you don’t like streaming apps you can still use good old usb player app for watching movies, though there is only support for the latest x264 and x265 codecs. once upon the time there were avi and xvid, but not anymore. Otherwise the Tizen usb player is one of the fastest and offers support for subtitles and has a lot of customization options.

The gear icon is where you find the advanced settings with picture, sound and other TV settings. The picture  Menu is where you find the  brightness, colors and other calibration TV settings. The Au80 has a fast dvb tuner, so browsing channels is really quick and upscaling works great. Inside the channel setting you will find an updated favorite menu to more easily organize channels. A universal program guide remembers your content choices and recommends programs that it predicts you’ll like.

When it comes to picture performance, the au80 uses an edge led backlight with a semi gloss VA panel, so you can expect excellent contrast and an impressive black uniformity in the dimly lit room. I really like the motion on Samsung tvs and you can select these various motion options, which will reduce motion blur. The 4k picture quality is excellent and the HD channels show up well. when upscaling standard-definition, whether from the tuner or web. Netflix and Youtube works fine and without any problems.

Despite the screen having only 50hz to 60hz in the specs, Here Motion processing helps a lot, thanks to the samsungs advanced crystal processor and, which can improve picture quality to almost look like it is 240hz. of course if you enable the game mode, the screen default native refresh is still only 4K60, though Motion Xlerator Turbo can achieve 4k120. In general It has very good support for gaming with input lag below 15ms.

When watching HDR dolby content, brightness levels can go up to 400 nits, which is 25% more  in comparison with 300nits, budget 4k tvs, so it has more than enough brightness for dimly lit rooms, but if you have a lot sun in the room and you want the best hdr, than you can check out more expensive samsung qled series, which can go higher than 600 nits.

The au80 offers quite a few distinct picture modes, including dynamic, standard, natural and movie profiles. Out of the box color accuracy is good so if you want the best profile for a sunny room is vivid or natural, if you select movie you can see that the picture has darkened slightly and this is the best quick profile for the dimly lit room, which is the best profile especially if you want realistic calibrated colors.

The built in web browser works quick and it has a responsive onscreen keyboard with smart letter suggestions, its useful for quick browsing, but for anything else i would still recommend screen mirroring from your phone.

In term of sound quality, because it’s meant to be on the wall the AU80 has very thin sides so there is not much space for impressive bass, but the built in speakers sound loud and actually more clear, so you should expect to get a better stereo effect than average mid range tvs. The 20 watts drivers do a good job of firing the dolby digital sound out to the sides of the viewing location. It’s stereo sound is commendable with a focus on the midrange frequencies; it can achieve a nice vocal.

Samsung has made marked improvements to this year led 8 series in terms of design. so ’If you’re looking for a tv that’s stylish and easy to use, then new bezel less design, faster picture processor is one of the big highlights. It is an enjoyable TV for watching movies in dark rooms thanks to its excellent va screen. so the levels of contrast are the best in this class.There’s more than enough here to give you a taste of the 4k, but on the other side it’s lacking in brightness to be one of the kings of hdr. of course as I mentioned before it could have more apps and games, but if you want fast and responsive tv with low input lag, then it still has an advantage in comparison with google tv. and with that in mind, samsung au8000 is easily one of the better options, if you want a good 4k smart tv for an affordable price.