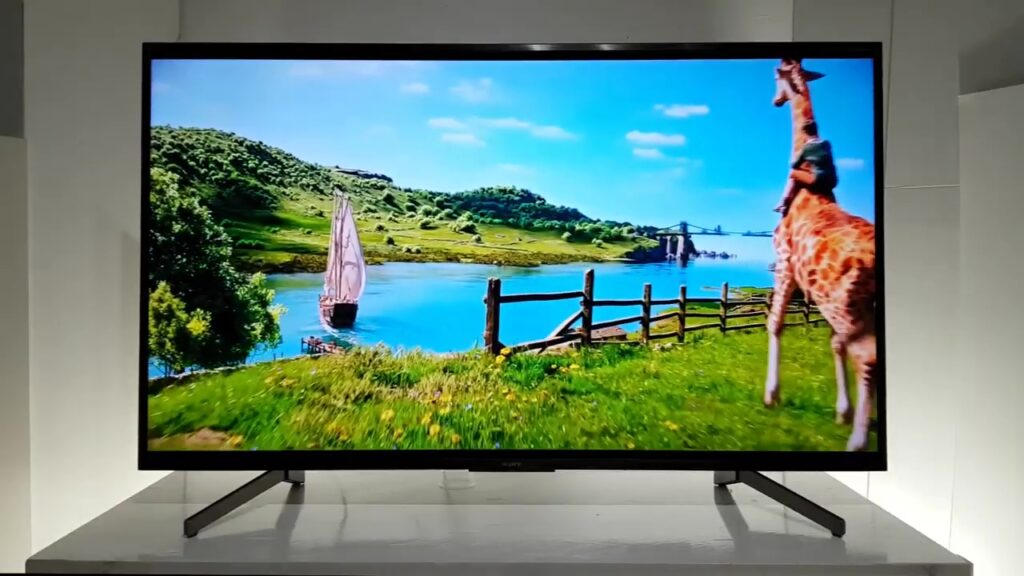 Today we’re gonna be checking out Sony’s XH80 series for led television now as the name suggests it is a direct led 4k tv but unlike other tvs in this class its offer X-Reality PRO ips screen from 43” to 75” screen size. As one of Sony’s best midrange hdr 4k TV’s, XH80 can deliver many of the functions as the higher -end models. While it might have a very capable Android smart tv, it will still be quick and easy to use if you only need YouTube, Netflix or web browser. You can also easily connect smartphone through chromecast and it also support Bluetooth connection.

Like many new-er good-lookin TVs XH8096 comes in a “original” black color. The shiny blast bezzeled screen porches on a sturdy dark grey feet’s, which have built in cable management, but if you think this is boring, you can also wall mount it. So lets go to the dark side… The clean, modern rear of the panel, is covered with classic matte plastic with one glossy line and… as you can see most connections are on the right side. You can connect 4 hdmi, 2 usb, 1 composite, optical and headphone socket, which is very usable if you are still using 3.5mm headphones. It’s nice that they try to install one hdmi and audio port differently, but it would be amazing to have hdmi on the left and right side. luckily You can easily connect antenna.

At a glance the XH80 is a modern polished-looking TV. I can praise the built-in cable management in the feets, which is a good idea and it allows easier to hide cables. On the right side You’ll find three buttons for functions like power and menu selection. The remote control is one of those husky built remotes that offers timeless boxy sony design with big and comfort buttons. its got a slightly improved layout which improved the ease of use. It is equipped with key for Voice control on the top, sadly sony replaced youtube button, with google button, but at least netflix is still here. if you like to skip or forward movies a lot you can use it very easy with many control buttons, and pressing the central up-down dial has a good placement to control everything very quickly. The deep press on the button could be a little less loose, but it still feels good enough.

The installation process on the sony android tv is like an arrow from the bow, you just need to choose the language, location, connections and complete channel search. XH80’s strongest point is most certainly its android system and well calibrated ips screen. The list of android apps is massive, but ANDROID 8 still supports only specially made tv apps. It’s supported by a quad-core processor with only 3GB ram and 16gb memory. Nevertheless the apps runs both more slickly and more stably than it has done to date on Android 7 tvs.

Android welcome screen has an easy-to-navigate interface. Finding settings and menu options is pretty straightforward, and app selection from Google Play Store is very simple. the menus for this television work flawless and important functions like switching inputs or modes could be easily accomplished with only a few button presses and more complex tasks like renaming inputs were available through intuitive menus. when you do this you will find that Sony apparently felt they had to put more effort on the unique iCONS design. now let’s take a closer look at the famous android apps if you want to get the best out of the 4k… Netflix and Youtube apps quickly and without a hitch and important settings are easily accessible. In an android world where we all take multi-tasking for granted, it is possible to switch between apps without any problems. I was amazed by the usefulness of the google voice recognition feature youtube provides.

When it comes to the picture modes, The set comes with many different video preset modes, including Vivid, Standard. cinema and game setting. The TV is factory set to the fail safe standard mode, so if you want the best picture profile you’ll need to switch to either the vivid or advanced mode for the more settings. but if you want calibrated realistic colors I’m going to recommend a cinema profile. the 55XH80 was surprisingly good in certain areas. The use of an IPS screen meant that there were powerful vibrant colors and the viewing angles were wider than on VA panel TVs. The black levels on the XH80 aren’t perfect in the dark room, but they are improved in comparison with the Sony xf series from 2018.

Wide viewing angle quality actually turned out to be one of this sets biggest highlights. Trying to convince us all that colors are important, motion handling was not equally as exciting. but the TV was still able to deliver a tremendous overall picture. The picture is sharp and generally free of noise when upscaling hd sources. You’d expect HDR content to be better in the dark room, well its Colour saturation is excellent, but images just can’t get very bright at 400 nits in the sunny room. That lack of peak luminance puts it behind the more expensive 9 series with more than 600 nits.

Plug a drive into the USB and you will see the real power of the android. The vlc media player plays all popular video formats with subtitles and it has a lot of options to customize for casual and advanced users. The picture is sharp and generally free of noise when upscaling 1080p tv sources. Web browser work and respond well,and it has a number of voice shortcuts and clean and attractive menus that make browsing a nice experience. of course it is still possible to connect a wireless keyboard for a classic typing experience.

The quality of the games on Android TV is much better than on Samsung’s Tizen or Lg’s Webos, it supports high definition 3d graphics and it has big selections of games. If you need better controls, you can easily connect wireless gamepad. The input lag is around 30ms, so it’s okay for casual pc and playstation gamers.

When testing various music videos, I found the XH80 delivered clear and loud audio performance by hidden speaker standards. Despite being only 2, these speakers startlingly churn out 20W. So many people might find them useful if they don’t have a need for disturbing neighbors. It has great bass for built in tv speakers standards and midrange sound effects are projected quite well and without any distortion.

The Sony 55XH8096 gets off to a great start with its cool looks and The overall features and picture performance make it a one of superior mid-range 4k tv. Very good ips colors, bright screen and smooth android performance tick off a lot of the right boxes when it comes to quality television. Although it doesn’t have the fastest processing, it certainly provides commendable multitasking performance and wide viewing angle actually turned out to be very good. Of course We can’t ignore the higher price tag either, which is not extremely competitive, but if you’re looking for the higher build quality I would still recommend the Sony XH8 series over many cheaper name-brand sets on the market at the same price.