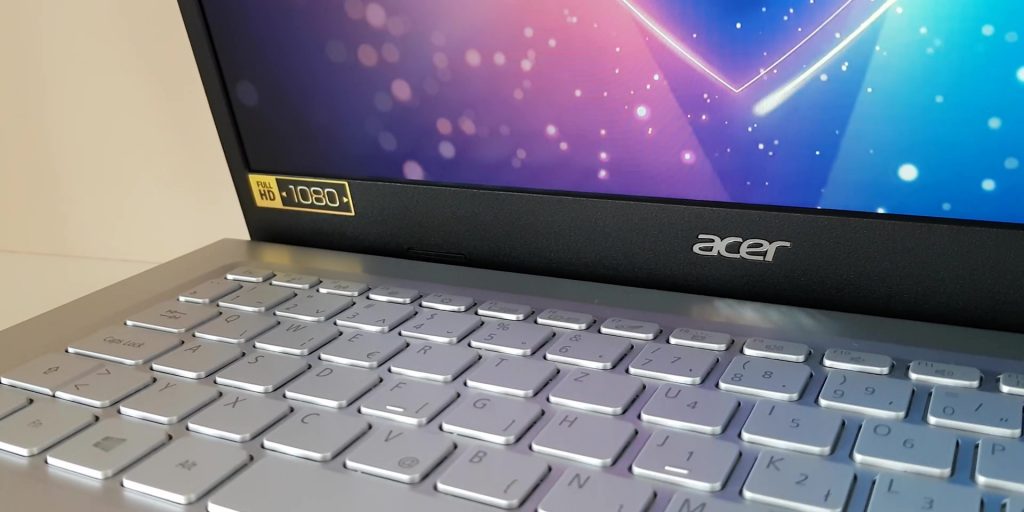 It might look expensive from a distance, but the Acer Aspire 5 is not made from silver. it’s designed to be fashionable where it counts the most, so inside a thin profile with fast processor, and you have a choice of many different configurations from ryzen to the intel processors, in this review we will take a closer look at the 14 inch screen version.

The specs of this year’s aspire 5 are solid to the home and office laptop and you can even play some games on it. I also found the processor memory is faster, compared to the generation before, which was much more lazy.The acer a514 has a brushed chrome logo stamped into the lid which is a nice touch, especially if you like to clean it. The top surface of the notebook has a simple smooth finish and gives you a feeling that’s something more than just plastic.

So when you open up this black lid, it has this brilliant hinge that opens up nicely an air gap at the bottom and in doing so it just gives it a lot more airflow.Once you draw your attention away you will realise the chassis is covered with plastic but it still looks different, because there are smaller bezels and edges it is simply more elegant and refined. Bezels look nice, although they could be thinner on the top. The overall exterior design is otherwise similar to competition.

Given its size, the acer 5 has an above average number of ports. On the left  side it comes with a charge, Ethernet port, one HDMI, two USB and one USB c slot, sadly there is no card reader.  The right side of the notebook is where you’ll find power indicators,  audio mic input,1 usb and lock port if you like to put a golden chain on it.

The Backlit Keyboard feels comfortable, As is common with chiclet buttons, the key travel distance is small, but I think most people can get used to this keyboard, though the buttons could have more contrast with backlight on. So if you care about that there is also a version with black buttons, of course it doesn’t look so stylish.

The Touchpad is responsive and clicky and has a good feel to it. The touch surface has low friction  and supports complex gestures clicks, though you could still have a couple complaints if you like to use ultra precision trackpads.

The acer a514 screen is definitely an advantage for anyone who wants a better screen. The 14 inch led backlight display panel delivers a higher pixel density with a resolution of 1920 x 1080 pixels. Acer claims this screen has around 60% coverage of color space and in the test screen adapted well to color calibration and produced impressive colors.

The display has a semi glossy surface that helps make colors more vivid, but this also brings some reflections as a result. The highest  measured brightness is higher than 280 nits. Thanks to the ips technology The viewing angles are excellent and there is little color shift from side to side. so you will have very good color accuracy of the display. it’s clear that the aspire might be good enough for those who want a sharp screen for editing graphics and text or just like to have a special label below the screen.

The built in 720p webcam is good enough for zoom and similar apps, but for anything else I would recommend it.

Inside of the chassis. Aspire 5 has quiet and simple cooling design and it is quite effective, so you wont notice any heat spikes, except maybe if you like to polish acer logo often,  There is 4 gigs of ram that’s soldered onboard as a one slot, that you can upgrade to 16gb and there’s also wifi 6 and bluetooth 5 and faster m2 drive, just in case you also have one free slot for 2.5 ssd drive, which is rare these days. The second big change they’ve made is the processor optimization. As expected, the benchmark gave an above average score. The  intel has improved i5 memory speed so that’s like a 10 to 20% increase and it is very noticeable in editing apps that use more cores.

In the gaming tests, Iris graphics  scores enjoyably as well, which was best seenable in games like overwatch, fortnite, gta 5 & similar.  However, there are still games that will need more powerful graphic cards, so Those looking for better gaming performance should check out the aspire with geforce mx graphics, which offer 30 – 50% better performance, but for the most part, Iris graphics will provide a good performance for casual gamers and creators.

With a 3-cell Li-ion battery that provides decent runtimes, it will take less than 2 hour to fully charge the battery. It will last above average,  so you could watch youtube  perform some office tasks, and surf the web for at least 6 hours on 70% brightness. This is respectable for a multimedia notebook. anyway While surfing the Web with minimum screen brightness i even squeezed  more than 8hours out of the acer’s 48wh battery. I got around 3 hours with the screen at max brightness and volume at about half. It’s pretty average, but I was kind of surprised. I thought I’d be able to get less, but it looks acer has really improved processor throttling.

The sound quality is still acceptable and maximum volume can still surprise you in some music videos. Like many notebooks, It has two speakers located on the edges below the touchpad. the speakers deliver good stereo sound, so high and midrange tones are ok, but if you want powerful bass, you will still need to connect an external speaker.

The Acer a514 is easily one of the smartest laptops for work or entertainment as long as you don’t need to do heavy video editing or gaming. We certainly don’t have any complaints with the chassis design,  okay maybe the button design isn’t the smartest and It also doesn’t have the thinnest bezels, but it still has a sharp Full HD wide angle screen with nice colors. though the lack of brightness in direct sunlight may be a downside, if you like to work on the beach.

Otherwise it’s touchpad and keyboard are good enough for daily use and the battery lasts above average. All in all the Acer Aspire 5 is well equipped and it doesn’t have a lot of competition thanks to its fair price and more than generous specs,  it will be a good choice for many users.