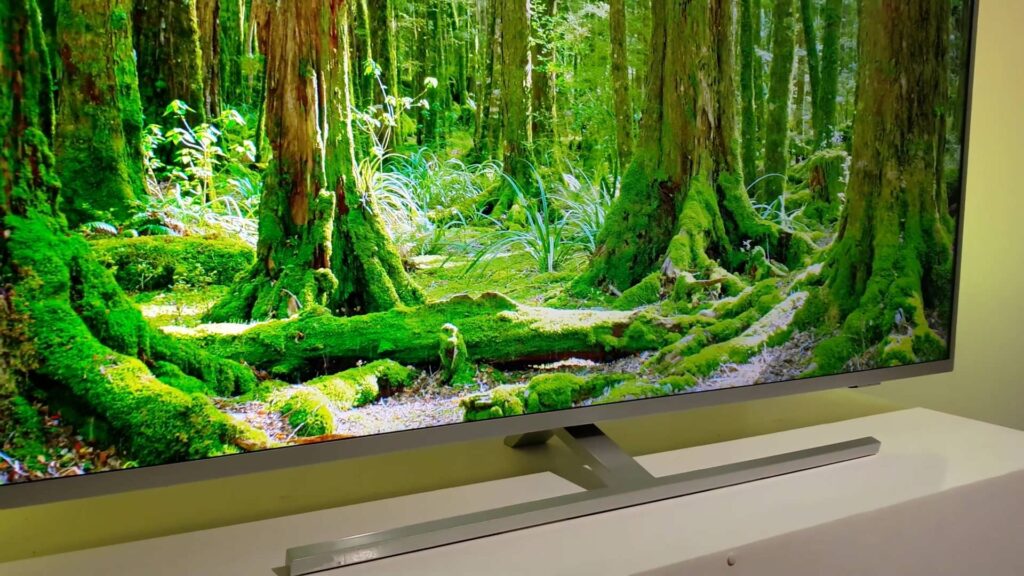 As you can probably imagine, it’s time for another breezier review and today I’m gonna show you a very special thing I think you guys may consider if you are searching for extraordinary experience for an ordinary price.

So we are talking about the one from Philips  pus85 Series of  4K Smart TVs which features direct-lit LED backlighting, P5 processor, HDR10 Dolby Vision. They have tasty Android Pie apps and like the rest of the finest philips tv line-up have a unique ambilight . They come in 43 inch all the way up to 75 inch screen size. Philips claims they offer up to 20% better the colour expression in comparison with the first generation of the one from PUS73 series.

In this video I will go through pus8505 design,  apps,  picture and sound quality and at the end give you my opinion, if you can take the one at home and introduce it to your wall.

The one has a very special look, which Philips calls the ‘Performance’. So a stand and frame are made from premium materials.

The design doesn’t wander far from the last year pus7354. Expect a little higher minimalist reverse T-shaped stand, with a single point holding the screen up. like the first generation of the one, You can still easily turn stand around the centre of the screen.

There are tvs thinner than pus85, but difference is not colossus, and i still prefer thicker tv than any thin tv because it’s easier to move it and less chance to damage screen. anyway the one still looks better on the wall, than many other tvs on the wall, thanks to the ambilight effect. and ofcourse you dont need any special kits to mount it – because it supports standard vesa wall mount, so It can be easily wall-mounted..

A look from the right side reveals inputs and all around you can see color leds for ambilight effects. TV has all connectors on its backside, including: headphone jack, which many TVs don’t have anymore. It has built in Bluetooth Audio support so you can easily connect bluetooth speakers or wireless headphones.

5 The pus85 comes with a new and improved smart remote with bigger buttons and its now much more easy  to use in a dark room. On the top you have your mic button for your voice assistant, a media control and input buttons of course you have all video app links but the main thing you’re gonna use on this remote control is a home button to get to the android apps at the center of the remote.

The remote feels solid in the hand and I like the texture on the buttons. But the real magic begins to show up  when you press the special ambilight button. Its light certainly looks promising enough.

Philips also made a more practical remote, so If you want more buttons,  pus8535 and pus8555 comes with the keyboard on the back of the remote.

There is a single physical button on the tv, which works like a joystick. one press to access the menu and then you can move around and confirm settings. two quick presses in the centre turn off the tv.

6 Philips PUS85 is based on Android 9. despite a more colorful and detailed interface navigation remains very responsive and smooth even when jumping from one app to another.

Obviously the effectiveness of android tv depends greatly on the ability of the built in quad core processor with 3gb of ram and 16gb of memory.

otherwise you still get a menu with 5 rows on the first one you can put your favorite apps inputs and so on and in this upper row for different apps you get recommendations and ability to jump straight into a certain video or app and continue using it. Finding settings and menu options is pretty straightforward, and app selection from Google Play Store is very simple..

7 Pus85 series have 10bit direct LED panel, what that means is that colors will look better than on many edge led tvs.

The mva technology has the best from ips and va worlds of screen. it has better colors from all viewing sides, It may be a little on the small contrast side compared to last year’s one – pus7354 but it still looks very good with minimum blooming in a pitch-black room.

The 50”, 58” and 70 inch versions have the best black levels and contrast  in the dark room. There’s a proper sense of color depth to the picture, with excellent shading in both bright and dark parts of the screen.

Picture quality in Standard mode is okay, but when you turn on a vivid profile,  things get more interesting. of course if you are a perfectionist or if you just want realistic colors i suggest to go with calibrated Movie or ISF profiles.

Ambilight helps in creating perception of better contrast and you have available many different profiles to customize it.

Thanks to the regularly tweaked P5 processor Noise reduction was efficient and The picture is sharp and generally free of noise when upscaling hd sources.

pus8505 has improved calibrated color accuracy in comparison with the pus7354, because they support wider 90% color gamut coverage and that’s a big jump from average 75%.

General colors in HDR content look natural when playing Dolby vision through the netflix or usb player, because of accurate gamma tracking. Only The brightness levels bring it short of a truly powerful hdr  experience, it can’t go higher than 400 nit’s so if you want a more powerful hdr you should go in the direction of 9 or oled series.

pus85 displays HD content well with no upscaling artifacts. Built tv tuner is fast and responsive. you can simply jump between channels, and select it  as easily as flicking between videos

To access the YOUTUBE you need to press a few buttons, this brings up the launcher. it works like fast and furious. You can simply jump between channels, and select it  as easily as flicking between videos. Youtube’s latest interface comes with an improved homepage and faster suggestions.

you can play music and watch movies, pictures from a USB  very easily and android play store has a lot of apps that can open almost any file and it supports custom subtitles.We would suggest installing VieLCi Player.

11 The android carries its decent list of features inside a reasonably attractive web browser. It supports all important web formats. although it still cant replace windows web browser.

12 coming to gaming , we measure input lag to just 30 milliseconds in the game mode which is on par with many TVs in this price class and good enough for playing first person shooters.

Android games are the best part of android tv and they work great. Of course you need to be aware that you will sooner or later need to connect a gamepad and some games like beach buggy works just fine with remote control.

The Philips PUS85 has two down firing speakers. The speakers sound well balanced in volume and they deliver pleasant bass sound without rattling or distortions. In Comparison with last year the one it has higher stand, so music from speakers below the screen, appeared less muddier and  taken with it the impressively potent mid-range sound.

Philips rightfully has an excellent reputation for the best picture processor and it has very good color calibration out of the box.  In comparison with some tv brands, It can handle all smart tv apps and movie formats and has excellent motion processing.

It can reach a impressive contrast with powerful colors, and the main advantage – stunning ambilight, its almost too good to be true so i can say that Philips pus8505 is a trippy 4k smart tv, but every illusion has its limits so if you want more brightness, than you will still need to look at higher 9 or oled series.