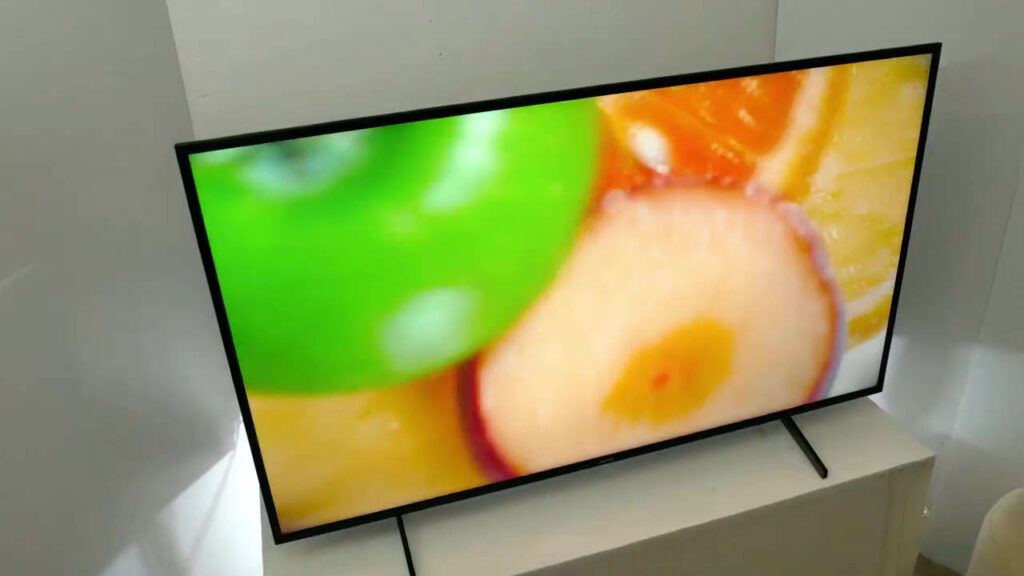 The latest sony mid range 4K smart tv set support 10bit hdr, dolby digital and it is available from 43” to 75” screen size. This review relates to the 55-inch variant in the x70 line-up, a medium size that makes it perfect for almost any room these days. The 55×7055 delivers the kind of picture quality we’ve come to expect from Sony with vivid colors from virtually any side. While it might have only basic sony smart tv apps, it will be easy to use if you like to watch youtube in the office. 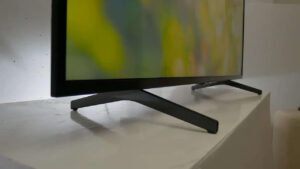 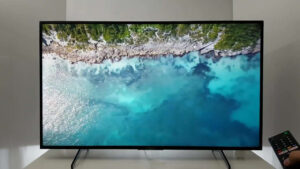 it looks elegant in its metallic frame finish, ultra-thin profile. The shiny blast bezzeled screen  perches easily enough on the two thin, V-shaped, ice skate feets, which sadly doesn’t have built in cable management. otherwise they  feel solid and match nicely with the bottom edge of the panel. Without the stand, the x70 looks much like any other of Sony’s mid range models. There’s a modern thin bezel with a sony logo at the bottom of the screen. it’s not exactly super-slim, like the high end models, but it still looks thin enough to be mounted on the wall.  Around the back The clean, modern rear of the panel is covered with classic matte plastic with one glossy line and… as you can see most connections are on the right side. 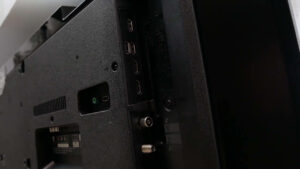 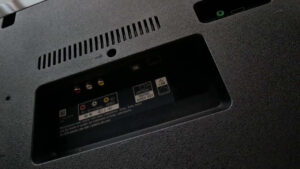 The Sony has a fairly typical array of connections that includes 3 hdmi, and whooping 3 usb, 1 composite, optical and headphone socket, which is very usable if you are still using 3.5mm  headphones. It’s nice that they try to install one hdmi and audio port differently, as usually antenna input, still doesn’t like fat connectors. But if you improvise like an ace Ventura, there can be enough space. On the back side of the screen You’ll find a wall mount and on the right side three buttons for functions like power and menu selection. 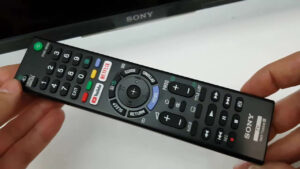 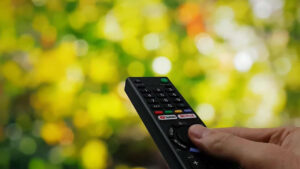 The remote control offers timeless classic design with big buttons. Sony got a slightly improved layout which improved the ease of use. Some will mourn the lack of the voice button, but  it still provides quick access to the bulk of the tv functions and settings and It is equipped with many shortcuts to inputs, media control and you also have standard video stream apps buttons., it even has some video controls, so if you like to skip or forward movies a lot you can use it very easy with many control buttons, and pressing the central  up-down dial  has a good placement to control everything very quickly.  The buttons otherwise feel very comfortably and are nice to press. 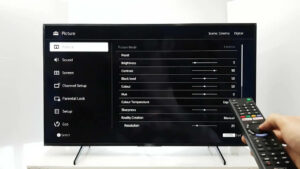 The installation process is simple. you just need to choose the language, location, connections and complete channel search.  Sony did revamp its linux home menu on the x7 series, so you now have a faster menu with icons similar to the android. In general linux is getting better with each new version, but the difference is still small. The list of apps on linux smart tv is limited in comparison with android tv, but it still supports many popular smart tv apps. The Disney,xx,xxx app is missing , which is disappointing but of little surprise. 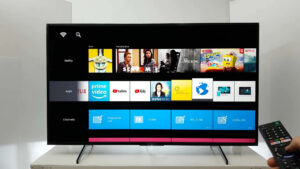 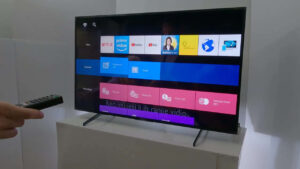 Welcome screen is simple but usable. SOny continues to improve its Linux smart platform, offering a more easy navigation. the menus work fine and important functions like switching inputs and access to the settings is easily accomplished with only a few button presses. Speaking of settings, Sony has also added a few improvements, which is a smart search feature that adds faster access to the more frequently used functions. 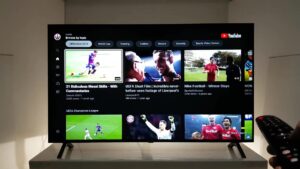 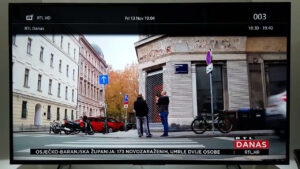 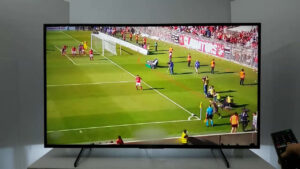 x7 brings with it the next generation version of Youtube. The big new addition here is faster menus that uses machine learning to analyse video clips in order to show it more efficiently. Netflix works quickly and without a lag and important settings are easily accessible.I would like to see an improvement in the app selection, but if you want more apps, then you will need to go with android tv. 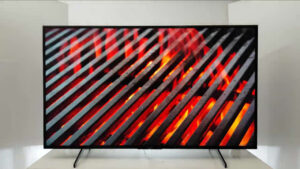 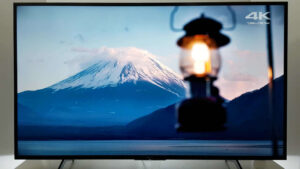 Sony’s strongest point is most certainly its well calibrated ips screen. The picture looks very nice in a bright room, especially colors, they were quite impressive even when the x7 was fed with low quality sources, like hd tv channels. Wide viewing angle quality actually turned out to be one of this sets biggest highlights. the sharpness of the 4K image is fairly controlled, but motion processing could be still faster, but its perfectly fine for movies and news, of course if you want the cheapest best tv for the sport or gaming from sony i would recommend xh85 series, which have the best motion for the price from sony, but its much more expensive. 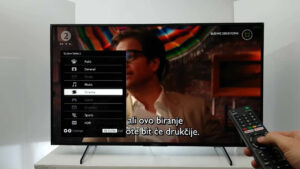 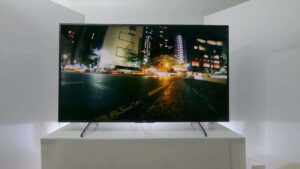 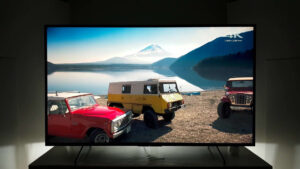 When it comes to the picture modes, sony has included  many different video preset modes, , including Hdr, Vivid, Cinema and sport game setting. The TV is factory set to the safe standard mode, so if you want the best picture profile you’ll need to switch to either the vivid or advanced mode for the more hdr settings.  but if you want calibrated realistic colors I’m going to recommend a cinema profile. 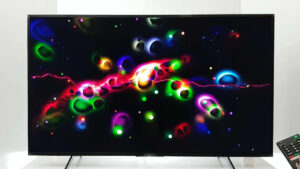 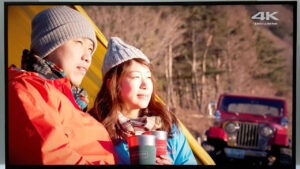 The use of an IPS screen meant that there were powerful vibrant colors and the viewing angles were wider than on VA panel TVs. The black levels on the xg80 aren’t perfect in the dark room, but the x7 was still able to deliver a very good overall picture.  The x7 does a lot right when it comes to its HDR performance, with detailed colors that are reasonably accurate. It doesn’t take long to find the advantages of this SOny TV. its hdr Colour saturation is excellent, but some scenes of course just can’t get very bright at 380 nits in the brightly lit room. That lack of peak luminance puts it behind the more expensive xh85 series with more than 600 nits. 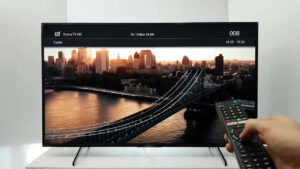 The usb media player plays popular video formats with subtitles and it has a lot of options and the picture is razor sharp and free of noise when upscaling hd picture..The x7 includes a Web browser, which remains intuitive and easy to use. Sony has added handy quick shortcuts that can be accessed.It includes all the favorite and history settings, as well as quick tabs. There’s really not much else one could ask for at this level. Mostly 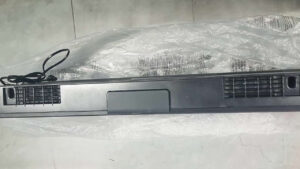 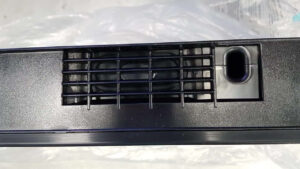 Like all sony tvs it has built in game mode, so if you are gamer, you can easily connect playstation or pc. It’s highly responsive, too, The input lag is around 15ms. so you will much faster than average tvs with 30 to 50 ms.

10 With two standard speakers, the sound on this TV despite its slim proportions sounds quite good. despite being only 2, these speakers startlingly churn out 20W and they provide a greater sense of stereo separation. When testing various music videos, I found the x7 delivered clear and loud audio. There are a few audio options to try out if you want the best sound for music or movies. The high and mid-range is well represented, while bass effects are projected quite well and without any distortion. 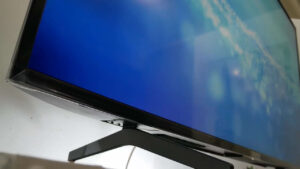 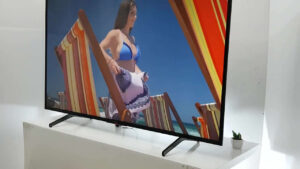 The SonyX7 proves to be a capable 4k smart tv with attractive design and you will be delighted by its apps speed performance. The picture is solid at bright levels and it does a remarkably good job in terms of picture quality  For detail, for colors and largely for contrast too. In terms of user experience, The SonyX7  leaves little to be desired, unless you want android apps or voice control. All TVs at this end of the market have limitations that are hard to overlook, whether that’s poor viewing angles or lazy motion processing issues. Although x7 doesn’t have the fastest processing, it certainly provides commendable system and screen performance and wide viewing angle actually turned out to be very good.  despite being a little more expensive than some mid-range rivals, the x70 is still an easy choice if you want the simple and responsive 4k smart tv.

if you want to know more check out my tv comparisons lists. subscribe, if you have any questions, let me know, thank u and see u soon