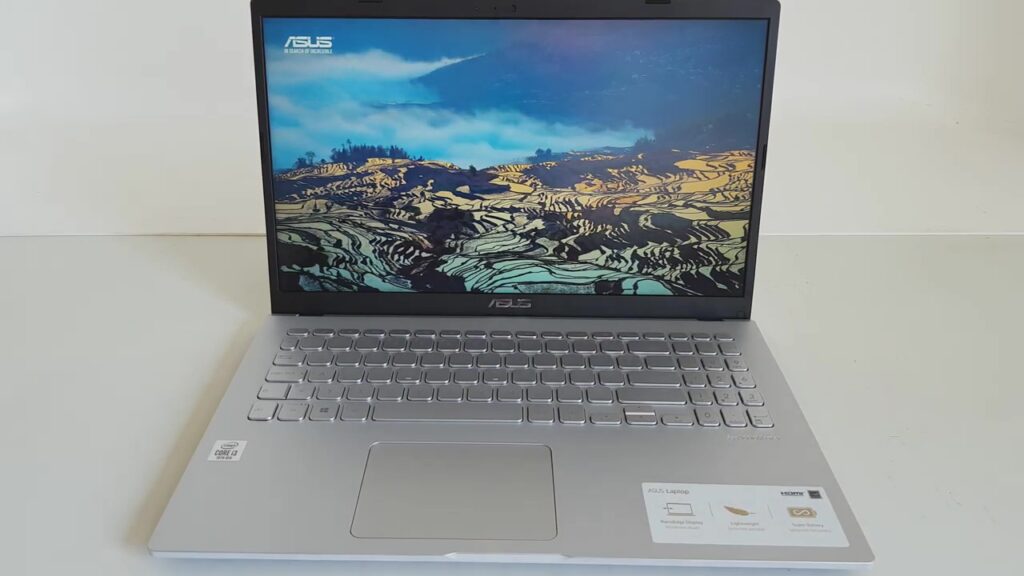 It’s time to review something incredible. That’s what I think when i first look at the box of Asus x509J. Those who don’t know Asus, this is the company that solved one of Intel’s processor problems in the 80s and created a motherboard prototype for Intel 486 processor in 1989.  Today The Asus VivoBook series consists of many good laptops and are known for affordable performance and cool design.

This time around, Asus takes its alteration back to the future by removing the thick bezels and OFFCOURSE  placing  FASTER ddr4 ram and ssd drive into an improved chassis that’s sure to draw comparisons to many more expensive laptops. The  processor  I got with my configuration was intel core i3, which is a natural choice for web, movies and office, but you can also play some games on it . more on that i will talk later. For advanced gamers and creators or I would recommend the i5 or Ryzen 5 version.

So this i pretty much original box, I like the visuals let’s give it a look. So here is this little thing called the charger,  the machine, it like doesn’t feel like a bad heavy. and course what would you do without your little manual instructions. in terms of build quality, it feels solid there’s nothing I would criticize  in terms of its keyboard strength like if you press on anywhere on the shell it feels sturdier

The x509j features a delicate silver brushed chassis, both on the lid and inside on the keyboard tray. I thought it was metal at first but it feels like it’s plastic. it is fairly thin and compact. there was a little bit of flex,  nothing major but the bottom chassis was more flexible than I thought it would be.  The new design still bears some similarity to its predecessor, which itself was enhanced with a sharper full hd display with thinner bezels.

Moving around to the inputs. I much prefer this look the ports have also changed a little bit On it’s left side, the x509j has an USB and  HDMI USB C, the AC adapter, but strangely CHARGE INDICATOR  IS mounted on the other side of the device. The right side has a lock port, two USB slots, audio and micro card reader.

the Asus’s keyboard has full number pad and offer solid typing experience  I was able to type very quickly on it for the most part and  there’s a more travel on the keys in comparison with average laptop keyboards, so The keys have a comfortable design, but sadly. on the basic x509 version there’s no backlit keyboard, except tiny LED dot on the special button like  caps lock.

The touchpad feels particularly clicky and it doesn’t feel too small. I think it’s an above many mid-range touchpads.

The fhd screen it’s bright and has pretty good color accuracy. i love 1080p  resolution it  keeps text and graphics looking razor sharp, but, because basic model doesnt have ips screen its vgiving you limited off-angle viewing.  The integrated webcam works as advertised, it offers standard quality video, but it’s a still far cry from the best web cameras.

Its nice that Asus implemented anti-glare that eliminates the reflections on the LCD. The 15-inch screen only  support 60 percent of the color gamut and  thats okay for web browsing, watching videos or office use. On other hand it is not very bright, according to light meter tests, the maximum screen brightness can get around 200 nits, which is not enough for comfortable work in direct sunlight. The contrast is okay. Unfortunately, the viewing angles are still far from perfect. so Just slightly tilting the screen quickly darkens the contrast and colors, so if you want better results, go with ips screen version.

The x509j performed smoothly and without a problem. I ran the web benchmark at the highest settings getting decent results.

For a budget mainstream laptop, the dual core i3, and ssd drive in the Asus performed well. With some tabs open in the web browser (one of which was streaming You Tube video) and apps in the background, there  wasn’t lag when scrolling and switching between programs.

This laptop uses a compact 45 Watts adapter and  I found that it took little more  than 1 and half hour  to fully charge the battery. It gives a fairly good impression.

On the Battery Test, which involves continuously surfing the web and watching videos over Wi-Fi, the 2-cell battery lasted more than 4 hours, but it should last up to 7 hours when you lower screen brightness below 60%. so i can say it has an excellent battery.

If you look closely you’ll see that there are two tiny speakers under the keyboard. Listening to music videos on the x509j was louder than expected, I would even say a little above mid-range class in this price class.  The music from speakers easily filled the room with soft and clear sound, certainly good enough for watching youtube videos, of course you can easily connect any bluetooth speaker to pump up that bass to another level.

The asus x509J is one of the  laptops that are going to be getting quite a bit of attention.  I was kind of surprised by its premium thin screen bezels and  I was really impressed with the battery life. It delivers a comfortable keyboard experience. As I mentioned before i like the 1920 1080 full hd screen that they’ve put into this,