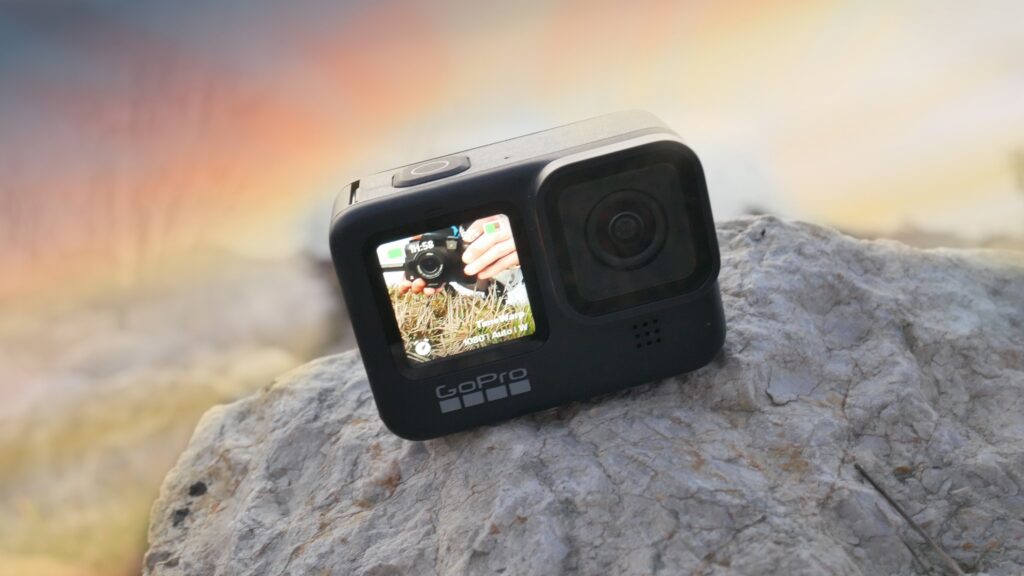 The HERO 9 is probably the most wanted Action Camera of the entire year. Gopro has delivered a lot improvements but also some problems. So without any further fuss, let’s go ahead and take a look at the full review. So this is Gopro’s flagship device worldwide. so it deserves flagship worthy hardware and it gets exactly that. On the inside we have a new front color display, 5K resolution video and detachable lens there’s also improved microphone mod and it features mic and HDMI input. All that in a package that’s just 70 mm wide and 34 mm thin.

Gopro has done something awesome and made new improved mods, but these accessories will work only on the new hero 9, because it’s a bigger than older versions, so  you get possibility to upgrade it connect much more things like new flash, lens and external mic. We have some things to say about display tech too. The biggest new feature of the hero 9 literally is the new front display. it’s a color LED display with  a high contrast for a perfect  framing or quick selfie.  First thing you notice when you’re playing around with the hero 9 is  improved user interface and video resolutions. it’s literally unmatched by any other compact cameras, I’ve been seeing 4k video resolution for a while but 5k at 30 frames per seconds,  that’s not something I can say for any other action cameras  and it just adds to that extra resolution experience. and this is the one reason why if I had to pick an action camera over other cameras, it would be hero 9.  I mean it’s the sharpest and coupled with the excellent stabilization.

There are few minor changes like the 120 fps 3k mode, Hero 9s external buttons are now larger and protrude more so they are easier to press in hurry. Another thing is they upgrade menus, one thing that I actually found a little bit annoying is that front screen and menus are not that smooth as they were on older hero cameras – it’s probably related to the bigger back screen, but they are improving this with new firmware updates. The other cool feature is a removable lens accessory like filters and protectors. While they are really really handy they could be still smaller, but they are pretty much all really useful and I’m really glad that they introduce lens protectors.

Speaking of the lens, the hero has a new improved almost 24 MP sensor. It blows older out of the water and 5K video in 30 frames per second at 100Mbps really impressed me. It has sharp focus it performs well even in low light which is great, it takes cleverly stabilized videos so you no longer need to bring gimbal on vacation or something.  I’m really happy it’s gotten to this level of quality and it’s fast. It’s really, effective.  There’s an improved linear view with auto-correct horizon leveling which looks better than ever before, but sadly slow motion mode doesn’t work in 5k. it’s got the internals to support everything, you want to shoot in almost any situation, of course 5k video drain battery 30% faster than 4k video, i hope that they will improve cooling and energy consumption in the next hero camera, so we can finally have 4k 120 frames per second and even 6k or 8k video.

You have many accessories for go pro cameras, my favorite is clip mount. it’s very easy to use it for stuff like first person shooting so is it a worthy accessory if you want to have it always with you without necessary funny parachute straps… another cool accessory is mount screw, which i think should be already built in the camera, but anyway it’s easier to switch gear with it, especially if you have more cameras and gear. my favorite combo is gorillapad and selfie, which is more usable on the field than selfie stick with built in tri-pod. What I want to see in hero 10 in the future is some kind of wide linear lens instead of fisheye lens. Yes, built in software linear mode is impressive, but if you look closer you can see that its just zoom and crop fix, so some details are lost in the process. This is especially noticeable at night.  The other limitation is that Fisheye distortion becomes visible if you shoot something more close from the side.

The battery life you get out of this is more than acceptable again miles better than older versions and you can get more than 2 hours out of this camera easily… and while the hottest 5k resolution video will last less than 2 hours. and you should recharge it in around 1 hour…  I understand why people complain about the battery door being hard to open, but this is because it will last longer and that doors don’t break under normal use so anything you throw at this it can handle… this is really a ultimate camera it’s one of the biggest and one of the baddest of them.

So there you go the hero 9 is obviously a good action camera it has very impressive video stabilization to me both on paper… because the specs are awesome it’s just a really great all-around device and I’m the experience on the other hand is also really good and for me… it’s actually enough to get me to switch from the hero 7 to the hero 9 as my second camera carry.