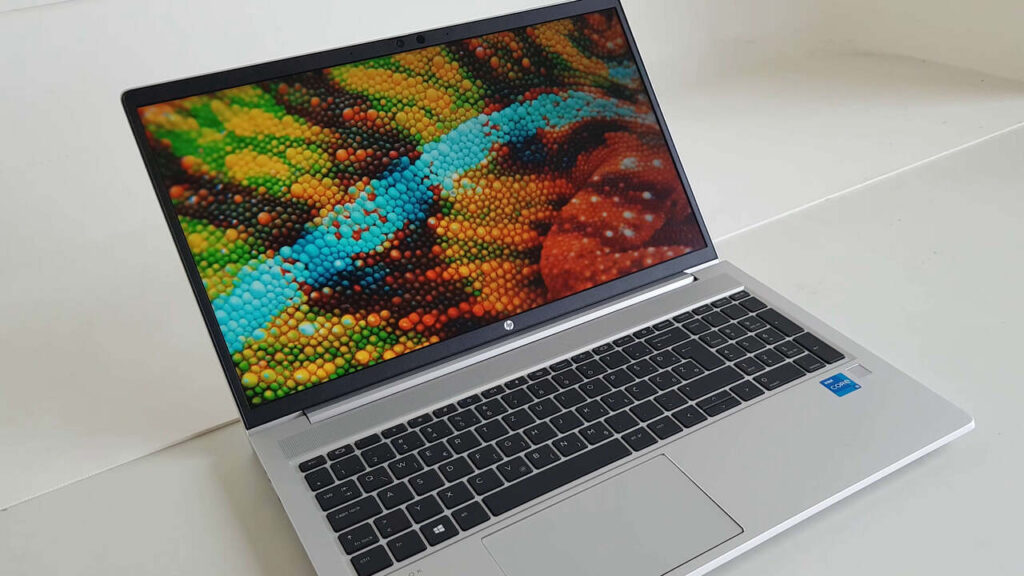 The hp has finally refreshed 450 series with the new g8 generation, which I think many people will decide for, especially if they want a fast & cool processor at an affordable price in the mid range territory. it is significantly more stylish than the g7 generation, which I estimated a few months ago and the key difference is in the new bezel and chassis design. Inside we have intel processors that finally catches the Ryzen in some tests, or is this just one of rumors spreading by an robot with a lot of time in hands.

Otherwise HP has 14 and almost 16 inch screen versions of this laptop, loaded with Ryzen and intel processors. In this review I will focus on the i5 version, which is the most versatile processor for home and office and has enough power for editing and gaming. Compared to the Ryzen processors, the i5 is not far behind and in some apps actually still performs better than Ryzen.

The chassis of hp G8 has been improved with some major changes. The biggest change is improved heat pipes and cooler. Now it is a lot more effective than on first generation. There’s also the new thermal block, heat pipes and there’s more too including a lot of improved features which i’ll show you. but First i’m going to start with exterior.

The sides of the laptop are smoothed and it gives the specter an artistic finish. i think it looks okay. On the left side of the notebook we have one usb,  t nd lock port, minimalism continues on the other side, so we have access to the card reader, the  and the headphone input, and on the right we can see hdmi. 2 usb,  usb  c and charger port. If you wonder where other ports are, well they are on the same path like an optical drive.

This legendary technology is sadly destined for oblivion. Otherwise The sockets are well secured and do not move even when pressed harder. In general, the housing is well made and there are no visible deviations. Compared to other premium laptops, at first glance it looks the same, it has a metal lid and keyboard deck,  but let’s not forget that its inner bezel  is still covered with plastic which is more sensitive to the color fade over time.

It is sturdily built; during test pressure applied to the bezels and deck it was without any creak sounds,

Here you see hidden vents below the screen and inside we have only one fan to remove heat from the processors in combination with heat pipes and vapor chambers.  Now when I first open this laptop one of the first things I noticed is that there is less space around buttons, but the keyboard still feels nice. it’s responsive and offers a good typing experience.

Despite the smaller chassis and thinner design, than its predecessor had, it’s commendable that we still have a numeric keypad and the chiclet button mechanism provides quick response. The touchpad is large enough and has well-arranged left and right-click buttons, although they could be better marked.

The ips screen has full hd resolution and offers at first glance more colors than the last generation. On top we have a high definition camera with mic that provides clear  image and sound, which has good quality for zoom or similar video apps.

The semi gloss 15.6-inch ips screen and covers less than 55 percent of the color gamut and it has above average brightness, according to light meter tests, it can achieve 250 nits, which is more than enough for comfortable use in a dimly lit room, but if you want to work in the park then you will need to find a nice spot in the shade. Expectedly, the 1080p screen resolution is sharp enough and viewing angles are much better than on cheaper tn screen versions.

So its looks like The build quality in general is okay and there are no visible deviations when pressing the case around the keyboard. at least if you don’t have hulk powers. At first glance, it looks like it’s made entirely of metal, but the chassis is still covered with plastic, which otherwise has a nice final look. All this leaves an impression. That it could be durable.

The one thing you will notice at night is elegant white illumination of the keyboard. The lighting is really subtle, so it’s much easier on the eyes in a dimly lit room.

The processor and graphics are powerful enough that you can easily run all office programs, including Adobe apps like Photoshop or Premiere, but for larger projects I would suggest at least 16GB of memory. While testing the games, I noticed the benefits of the new iris graphics, which is even powerful enough for some first person action games like legends of apex, but if you want to play cyberpunk , then I would still suggest a gaming laptop with at least geforce 3060 graphics card.

All these apps and games will of course raise the temperature, mostly if you are a passionate gamer, but i didn’t find it distracting while typing.

So let’s see more closely what’s hidden below the buttons. It seems we have a standard hp cooling solution with a long thermal block and heat pipes to help dissipation system. on the left we can see ram memory, which can be upgraded up to 32gb of ram, on the right we can see the m2 drive and if that’s not enough you can still insert micro sdcard. Most of the space, of course, takes up a battery,

I got around 7 hours of regular use so that’s just browsing the web and doing some music in the background. If we lower the screen brightness below 70% and disable some pre installed apps, we can improve battery performance even further. For more demanding tasks like watching netflix, youtube and playing games this time will of course can be reduced to less than 3 hours. The included charger does not take up much space in the bag and charges the computer in less than 2 hours.

We move on to the speakers, as usually they are only 2 and they are located on the top. It is immediately clear that they were designed with simplicity in mind.so I wasn’t expecting too much from them, but they can still produce good midrange sound, while the bass remains humble. When it comes to high frequencies, it can even excel in some music videos. At normal listening volume levels they are good enough for watching youtube. as always if you want more, its still the best to connect a bluetooth speaker.

Hp G8 has its advantages and disadvantages.  as far as design goes.  the whole chassis feels durable hp did a good job on build quality. The screen could have more colors, but is bright enough for indoor use and has excellent sharpness. The processor has just the power it needs for all kinds of web and office tasks, and also for something more if you want to edit graphics or play some games. otherwise compared to the other premium laptops, it’s not missing much, at least if you don’t need a powerful graphic card.  Maybe the screen bezels could be more thinner and the basic warranty a little longer. So, based on my experience with using it, I definitely recommend it to anyone who doesn’t want to pay too much for a laptop, but wants a fast, cool and reliable processor with a sharp screen.